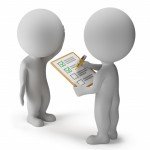 Today I was reading over at Ministry Marketing Coach blog and found an article on Evangelism Surveys (link broken and removed).

What is an Evangelism Survey?

Some of you have likely used these Evangelism Surveys.

These are the evangelism surveys that aren’t really surveys, but simply innocent questions to force open the door to a spiritual conversation.

They often collect irrelevant data, but lead up to questions about the gospel and a person’s spiritual need.

I had used an evangelism survey that asked something like (I can’t remember the real questions, but they flowed like this):

See the zinger that gets dropped like a hand grenade in the middle of innocent conversation?

I dutifully jotted answers as if I was collecting real data.

I was the obedient survey taker and shared the gospel at the end of the evangelism survey if they said yes.

I felt like I was witnessing, but feeling awful that the I had no purpose for the evangelism survey other than to force open a conversational door.

Example of using an Evangelism Survey:

For a seminary class assignment, I had to have a gospel conversation with someone at least once a week.

To fulfill this dreadful assignment (I was scared and nervous), I called up a co-worker and said

“I’m doing a class project. Can we meet in the cafeteria for coffee and allow me to ask you some questions?”

It’s true that I was doing a class project (for Evangelism 101), but the survey was bogus.

I had no purpose for the data, tossed the form when it was over, and walked away feeling like I had completed the assignment.  Mission accomplished.  Got the grade.

However I felt like I had told a white lie.

I wasn’t collecting data, the evangelism survey was simply a ploy to break the ice.

I was witnessing to the TRUTH of the gospel through a FALSE pretense.

I don’t use evangelism surveys anymore, because there is no honesty to them in doing evangelism.

Do you use Evangelism Surveys?

If you have an honest evangelism survey, I’d like to see it.

If you think evangelism surveys are an acceptable pretense for a conversation, I encourage your comments here.