A Simple Transition to A Spiritual Conversation 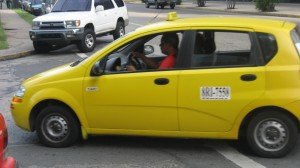 Sunday, our family took a taxi from our home to the location of our son’s piano recital.

The taxi driver was pretty talkative.

Among other things he rejoiced that the price of gas has come down over 50% from a few months ago.

Sitting in a taxi, we stumbled into an evangelistic conversation starter that could reveal spiritual thirst.

He made the point,

“Family is the most important relationship to have.”

My wife chimed in:

The cabbie agreed with my wife’s point and assured us that the did have a relationship with Christ.

The conversation continued naturally during the final block of our travel.

In this particular case, my wife noticed a possible opening in a conversation.

Statements like the one made by the cabbie move from the mundane to a belief, possible indication of a spiritual thirst.

My wife took the opportunity to share a single statement about her belief in a natural conversation.

It wasn’t a forced opening, and we were not steering the conversation as some books teach, but simply two people reflecting on their beliefs.

Evangelistic conversations can begin with simple statements like this and they can go deep or not. 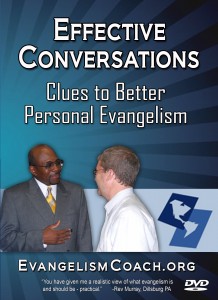 I have a DVD (or digital download) set that focuses on a conversational style evangelism that would be effective in similar:

Read more about the Effective Evangelism Conversations in the store

Related posts:
Does that make me a Christian?
Conversion Stories from the NT – Cornelius
This Journey to Faith Took 3 Years
The Nudge of the Holy Spirit
Drive-by Evangelism
Originally Posted: December 23, 2008 Category: Personal EvangelismTag: conversation skill, Personal Evangelism
Previous Post: « What can your church do in 2009?
Next Post: Grow from Witness to Evangelist