Last Updated: May 1, 2019 by EvangelismCoach 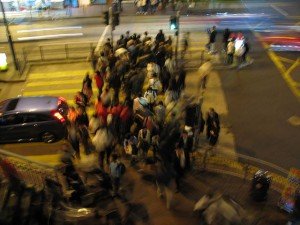 I found this article on Todd Rhodes Monday Morning insight blog (link below).  It features the results of a survey of formerly churched adults. (Photo: WanderSick)

This might suggest some things about our traditional church visitor practices like making them fill out a register, wear a name tag that says visitor, stand up and speak.

I address a bunch of these in my downloadable book How to Welcome Church Visitors.

The majority of formerly churched adults who want to go back to the pews want to return to a new church with new faces, LifeWay Research found. But only a few want to be identified as a newcomer during their first visit.

Wanting a less formal introduction, 26 percent of formerly churched adults said they desire to slip in and casually introduce themselves after the service.

“Their perspective on visiting a church conflicts with many popular church practices,” said Scott McConnell, associate director of LifeWay Research, in the report. “Asking visitors to stand, a practice that is meant to be welcoming to visitors, may actually do more harm than good. Attending church is a big decision, and the formerly churched clearly want to be in the driver’s seat. The church can, and should, take proactive steps to create a welcoming environment, and respecting their desire to remain anonymous – at least initially – is a critical part of this.”

Most mega churches cater to the desires of new visitors. Willow Creek Community Church in South Barrington, Ill., and McLean Bible Church in McLean, Va., give visitors the choice of attending a separate reception after services to meet church leaders and explore opportunities to get connected. Even in that small setting, they are not called to stand up and introduce themselves. The National Presbyterian Church in Washington, D.C., leaves out receptions altogether and instead has information packets available for newcomers.

Instead of getting the newcomer treatment from church members, the formerly churched would rather first “size up” the church, said McConnell.

“Their desire for a welcoming church environment is not satisfied when members suddenly act nice as they learn someone is a visitor,” he said. “It should come as no surprise that the formerly churched prefer to size up the church before they identify themselves as a visitor.”

According to LifeWay, the formerly churched represent approximately 7 percent of Americans.

The study was based on a national sample of 469 formerly churched adults in August 2006. The formerly churched were defined as Protestant adults who currently attend church less than five times a year, but previously attended regularly (at least twice a month) as an adult.

Do you want more first time church visitors to come back a second time?

Read more on How To Welcome Church Visitors

The Practice of Evangelism
Next Post: Rabbit and the Elephant Webinar Replay and Podcast