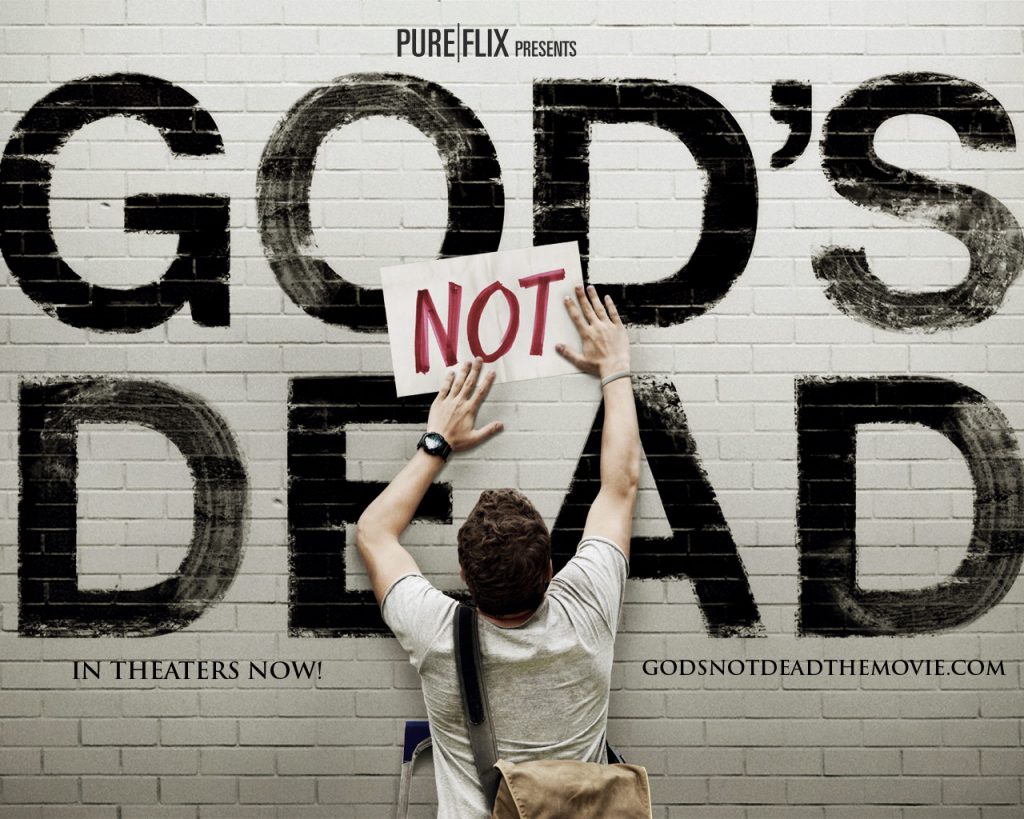 I recently saw the movie God is not Dead.

But a wise evangelist could suggest this movie to a truly seeking friend and allow it to open further conversational opportunities.

This movie will likely not successfully engage those who’s minds are already made up or hostile to the Christian faith.  Some of the story lines and character arcs may seem too simplistic for people who are not seriously considering the claims of Christ.

On the first day of class, Professor Radisson wants students to sign a declaration of their belief that God is dead so that he can dispense of such notions without having to prove it.

Josh is unable to sign the declaration and the Professor assign him a task to present is arguments to the class.

The movie follows the presentation of various apologetic arguments and counter arguments.

Some of the class members change their mind and at least one becomes a believer.

Along the way, other story arcs are introduced

Reactions to God is Not Dead in our family.

Our family discussed some of the hard choices forced upon the various people because of their faith.

Each character had a point of view and a hard choice to make because of their belief and worldview.

While the Professor character was an exaggeration, the arguments that he puts forth are real arguments that Christians should have a reasonable answer for. (That is what Apologetics is)

The problem of evil and the why of our existence are two apologetic challenges that have been discussed for centuries, so the philisophical problems are not solved in the film.

Rather, our family discussed the reasoableness of the arguments.

We also discussed how many people have a personally painful reason to reject God.  While not everyone has such a story, it is a common enough basis that we wanted our kids to see it.

This is not a movie to bring an intellectual atheist to evaluate or enjoy. The atheist position is a bit of a caricature and will be more of a distraction than a conversational help.

The problem of evil and the existence of God continue to be some of the greatest philosophical challenges. The movie won’t solve it, but it does show us a good way to defend our faith and show that our faith is reasonable.

I have friends whose logic had lead them to different conclusions and they are as angry as the professor.

It’s hard to argue with someone who hates God, but the movie shows Josh sharing a reasonable basis for his faith without being obnoxious.

Ways to use God is Not Dead in your ministry

Rather than walk down that road, I’d rather suggest ways to use this movie in your ministry.

I imagine a couple of ways this movie could be helpful to the evangelist in personal evangelism:

Did you see this movie?

Please share with me your thoughts, reviews, etc. of this movie in the comments below.

Is your church website an open door or barrier to your church?
Next Post:A short film clip for an Easter Conversation about faith