How could a loving God send people to hell? 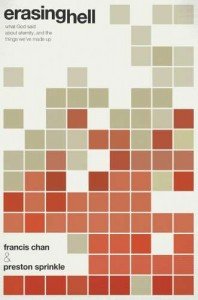 That is a troubling question.

The question of hell is one that I encounter in my conversations with people who are still wrestling with the goodness of God or contemplating the justice and wrath of God.

It’s a question that can lead to great theological or intellectual debates among seminary students, but when one makes the question personal, it hurts.

How could a loving God send [name a unsaved person you love] to hell?

I’d rather erase it.

Authors Francis Chan and Preston Sprinkle set out to examine Scriptural teaching on hell in Erasing Hell: What God said about eternity, and the things we made up.

They’ve asked the same questions.  Like me, sometimes they just don’t want to believe in hell.

This is a book about what God says on the topic in Scripture, while wrestling with the some of the emotional challenges and logical questions we must deal with.

If you are engaging non-believers in a conversation, the question of hell is bound to come up.  This book does some heavy lifting when it comes to helping understand this doctrine.   Chan and Sprinkle are clear: “we cannot afford to be wrong on this issue.”

A response to Rob Bell

In March of 2011, Rob Bell put out a book on hell called Love Wins.

I’ve not yet read it first hand, but rather through the lens of positive and negative reviews.  Bell suggests a form of universalism — that every single person will embrace Jesus—if not in this life, then certainly in the next (Love wins, p. 107)

Most of Erasing Hell: What God said about eternity, and the things we made up seems to be a response to Bell’s work.   While they don’t “bash” Bell like some have, Chan and Sprinkle challenge Love Wins, particularly in the 1st three chapters.

More particularly the authors probe the idea of a second chance after death and come up with zero biblical support of the concept, particularly those passages explicitly speak against this view (see Luke 13:22-30, Hebrew 9:27 among others)

Hell is not nice

Chan & Sprinkle wrestle with what Scripture has to say about hell.    Rather than sounding like a preacher who is angry at the world and condeming people for their vices, this book is both an emotional and intellectual read about the teachings of Jesus, the Old Testament, and the writings of Paul and John in the New.

They look at Scripture with the questions

The end result of their analysis is sobering.  They do a great job of sharing truth and wrestling with the emotions within them that truth generates.  If we manipulate the conversation on hell to make us feel comfortable, we are both irresponsible and selfish.

We forget that the eternal destiny of our friends and loved ones are at stake.

As I read Erasing Hell: What God said about eternity, and the things we made up, I found myself reflecting upon the people that I know and love.

They have names, they are in my life.  They love me and I love them.  Yet some do not have a relationship with Christ.

I found myself repenting of the casual ways I have thought about hell in the past.

Reading this book has helped renew a sense of evangelistic urgency to help people in their journey to Christ.

Order your copy of Erasing Hell: What God said about eternity, and the things we made up from Amazon (affiliate Link)

How does the doctrine of hell impact your evangelistic activity?  Share your thoughts in the comments below.

5 Ways to Grow Small Church Numbers
Next Post: Sharing Faith With Your Friends