Imagine you are at a dinner party one night.

Someone shifts the conversation and drops a bomb like this one:

Who are we to say Christianity is any better than any other religion? I think the essence of Jesus’ teaching is love, the same as all religions. It’s not our job to tell other people how to live or believe.”

The rest of the group fidgets awkwardly, but says nothing.

How do you respond?

Some would respond by vigorously defending Christianity.  Instead of fidgeting awkwardly, this person would storm forth and, perhaps not so gently, seek to defend Christianity.

But many of my readers would simply let that assertion pass and hope the dinner conversation would move on.

Such a person is not spiritually thirsty and maybe they’d take a pass.

Can you intelligently engage such a person in meaningful conversation without getting embarrassed or run out of the room? 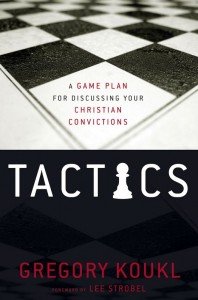 Greg Koukl’s book, Tactics, can help you in such a situation.

My review of Tactics

I am always interested in books about evangelistic conversation skills.

Greg Koukl’s book, Tactics lays out a great set of skills to use with people who object to your Christian beliefs.

If you are regularly talking with people who are hostile to your faith, anchored in their own beliefs, or dismissing your beliefs through un-reasoned cliches, then this book can help you further the discussions in intelligent ways.

The key metaphor is “Put a stone in someone else’s shoe.”

I like that. In my writings, I talk about spiritual thirst and how one can use questions to intensify that spiritual thirst.  Koukl takes it further.   In a culture where talking people out of the cherished beliefs is often seen as a vice, this metaphor captures the essence of the purpose of Greg Koukl’s book, Tactics:

Use questions to help people see the unreasonableness of their assertions.

What are some possible questions

Considering the situation above, what are some possible questions that would further a great discussion by applying the methods in Tactics:

And one from Koukl,

What Tactics is not

This book is not about how to share the gospel.  There are other great books for that.

Nor is this book about all of the Christian facts we must know.

If you want a book about discussion points you can use to win arguments or defeat your opponent’s point, you will be disappointed. It’s not a book about facts or a list of apologetic proofs that people need to know.  If you want ammunition to defend your viewpoint, this book isn’t aimed at that aspect either.

Rather, this book is aimed to help you use questions to examine assertions, claims, and world views, and use the questions to reveal weaknesses or faulty conclusions in those points.

Koukl equips you with questions to ask, rather than a list of facts to recall. He focuses on skilled questions to help move a conversation along.

Tactics equip you to help people talk themselves out of their beliefs through their own faulty logic. You don’t have to have immediate recall any apologetic arguments. These questions help you expose irrational beliefs that your conversational partner may have never examined.

Who is this book for?

I think this book would be accessible to: high schoolers and college students, young professional out in the work force, and anyone else that regularly has discussions with people who are opposed to Christianity but willing to talk with you. I think pastors could benefit from reading this book as well.

I liked how the chapters built one upon another and the “What did we learn” summary at the end of each, just in case I wanted to quickly scan the contents of each chapter again.

Order your copy of Tactics

Get your copy of  Tactics, Greg Koukl.  From Amazon.  This is an affiliate link and Amazon will kick me a few nickles.  I bought my own version.

3 Lessons for Hospitality Committees from a church visit
Next Post:Get your Guests Inviting Guests