How teenage evangelism is changing

The number of Christian teenagers actively sharing their faith is declining. 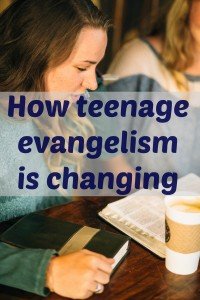 The study suggests a significant decline in believing teens attempts to witness.

The report goes on to say:

Teenagers are consistently among the most religiously active Americans, with nearly six out of every 10 teens engaged in some type of group spiritual activity in a typical week. Yet, the spirituality of teenagers is also remarkably diverse and fluid. . . . .

Kinnaman noted: “Christian teenagers are taking cues from a culture that has made it unpopular to make bold assertions about faith or be too aggressively evangelistic.

Some of the Barna Group’s other research shows that the vast majority of these students agree with the statement it is ‘cool to be a Christian.’

Yet fewer young Christians apparently believe it is worthwhile to talk about their faith in Jesus with others.

Among 13- to 17-year-old Protestants, there are actually signs of increased religious activity: they are more likely to pray, go to worship services, read the Bible and attend youth group meetings than were Protestant-affiliated teens a dozen years ago.

Given that religious participation is improving among this group, the drop in personal evangelism among born again Protestant teens is even more striking, dropping from 72% in 1997 to 53% in late 2009.”

What does this suggest for youth pastors who may still see lots of activity and high attendance?

Are there forms of evangelism training that can help your teens share their faith in a way that is natural and normal?

Perhaps part of their aversion is with some of the models and forms that have been handed down from previous generations. 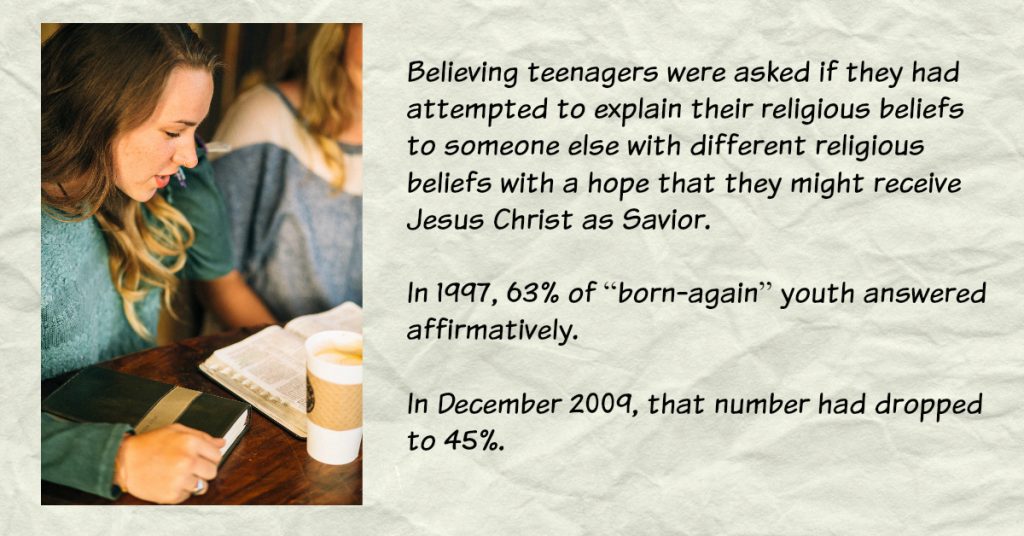 What I did as a youth minister

I did youth ministry for 15 years in at least 3 different churches.

I intentionally provided evangelism training every year for these students.

I helped them learn non-obnoxious conversational ways of doing evangelism in cooperation with the Holy Spirit.

Read more clicking on the banner below.

6 Steps to Organize an Invite a Friend Day
Next Post: Church Greeters have more impact than they think