Tyndale sent me the lastest volume on house churches for review: The House Church Book, by Wolfgang Simson.

George Barna’s name is attached to it, just like his name was attached to Tony and Felicity Dale’s The Rabbit and the Elephant: Why Small Is the New Big for Today’s Church.

His goal in the book is to show how the gospel can spread virally through rapid formation of simple churches.

His global perspective – watching church planting movements in various mission fields around the world — gives him tremendous credibility and enables him to show the effectiveness of this form of church planting.

Is there a better way to DO church?

In the early 1990s, a research project among young people in Amsterdam revealed:

This startling statistic helps raise the question: Are we doing church so ineffectively that people search for God elsewhere?

The proponents of house churches believe that their model is a more effective way, and a more biblically faithful way.

With each book I have read so far about house churches (admittedly only two), the authors still maintain a respect for traditional churches.  I don’t see them bashing or trashing current church systems.

Rather, they see people leaving traditional churches for reasons of burnout, dissatisfaction, and a desire to lessen the programmatic burden of too much to do in their life.

My own story right now

I what is happening as well.  I was a part of a church that had large gatherings 6 nights a week.  Pastor “teached and preached” 5 nights, plus 3 services on Sunday.  The same worship team would lead.  Even after new bands were grown up, I noticed the same volunteers were running the same programs all the time in the same facility.  There were no small groups or cells in this church – everything was done at the facility.

People were too busy serving to meet.

I tried to meet with one of the ministry leaders and got stood up 6 times because “something came up at the church.”  I didn’t want to be part of that system.  So we dropped out and found a church meeting in a home.

How are simple churches different from small groups?

The big question I had in mind as I approached this book reflects my own perspective from within the traditional church system.  I wanted to know

As I see it, there are three models of small groups:

Chapter three lays out common elements of a house church.

A house church is like a spiritual extended family; it’s relational, spontaneous, and organic.  For its everyday life, a house church does not need any higher level of organization, bureaucracy, or ceremony than an ordinary large family. . .  [it forms] its own support structure from within. (32).

As such, it has some common elements of what they do.  It’s important to realize, this isn’t a blueprint, but the skeleton that church planters still have to incarnate locally – the process of contextualization.

These are the goals of many small groups.  Is this not just another version of small groups?

In that same chapter, Simson goes on to explain why this isn’t just a small group of a larger church (46-50), by listing some distinctions between the house church and other types of gatherings.

Then in chapter 5, he teases this out a whole lot further by giving a table of 13  differences between house churches and cell churches.   Page 75 gives this chart.

Ultimately, he answers my question that I ask of his text.

Characteristics of a House Church

Who is Wolfgang Simson? 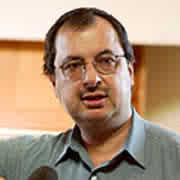 Wolfgang Simson was born in Germany and has German, Jewish, and Hungarian roots.

Since 1983 Wolfgang has been involved in the planting of several churches and in church-based leadership positions, while at the same time beginning a life of extensive global research on growing churches, church planting movements, and revival and mission breakthroughs.

Wolfgang worked for two decades as a church growth, evangelism, and strategy consultant, researcher, and journalist within various Christian networks and regional and global strategy think tanks in close to sixty nations.  He is the author of twelve books that have been translated into twenty languages.

His book Houses that Change the World (originally published in the UK) is widely recognized as a classic of the house church movement.  Now revised as The House Church Book, this definitive work offers a comprehensive understanding of the past, present, and future of the house church movement—and the vital role of “ordinary” people in saturating the world with God’s truth.