Recently, in late July, I was in Volcán Panama, teaching evangelism training workshops at the mission base of Operation Mobilization Panama.

Missionaries from 6 different countries had come to Volcán Panama for two months of working with the local church.

To double up the use of the time, I also had the opportunity to do personal evangelism training at an international bi-lingual new church development called Iglesia Casa De Luz (Lighthouse Church).

The OM Panama Base in Volcán

The OM Panama base is located at the end of a road in a residential neighborhood at the foot of a dormant volcano, Baru (pictured below, center rear).   I am told that from the peak of Baru, one can see both the Atlantic and Pacific oceans. 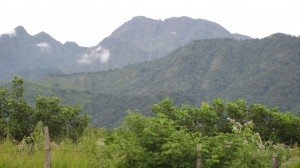 The town of Volcán is about 1500 meters in elevation (about 4900 feet).  The weather was a combination of clouds (we were in them some times), rain, and strong winds.

At times the wind was biting cold.  Perhaps one doesn’t think of coats, hats, and sweaters for life in the tropics, but that is often a necessity here because of the wind.

It often blows with such strength that tree saplings are bent over and grow at an angle.

I saw several trees that had a graceful curve to them.  The air is pretty cool year round that most houses don’t have either a heating or air conditioning system installed.

The terrain was mostly rocky, with giant boulders that had been left from lava flows eons ago.  Roads were sometimes paved, sometimes littered with potholes, and sometimes not paved at all.  A 4×4 would be a good car to have in Volcán.

See a photo album at our Facebook Fan Page.

The church has experienced an explosion of adult conversion growth in recent months.  I met many people who had become a Christian within the last 6 months.  Some as recent as two weeks prior to these workshops.

I want to share 3 vital keys I observed in their growth.

It was clear to me when I met with this church that they have a vibrant relationship with Christ.  This is expressed in so many ways — in worship, in prayer, in giving, and in community involvement.

The positive buzz about this church in the community is attracting those seeking all that Christ has to offer.  Word about this church’s love of the Lord and for its neighbor travels the social vines pretty quickly.

I attribute this growth to the dedicated prayer of the leaders.  Four mornings a week, the leadership team meets for prayer at 4.30am to pray for the church.  They meet in various houses and the host provides a little snack / coffee.

Those who make that prayer time reported to me what a blessing it was to be awake at that hour doing the work of the church and seeing its fruit.  Seeing the fruit of new believers in their midst reinforces their desire to make the sacrifice of prayer.

This is in contrast to other 12 churches in the town that are not experiencing such growth.

It’s not the intensity of the prayer, or the hour of their prayer.  This is an hour that works for them.

Rather, it is the discipline and commitment to prayer that has fueled the growth of this church.

Church Growth Key #3:  A confidence in the Holy Spirit’s work

Conversion growth is a supernatural event.

The Holy Spirit uses the church (and it’s people) to proclaim the gospel, and the Holy Spirit creates spiritual thirst or longing in the person seeking faith.

Evangelism in this church is not a high pressure “we can’t go home until someone raises a hand” altar call.

Rather, people invite others to start following Jesus, trusting the Holy Spirit has set up the moment like Philip and the Ethiopian Eunuch.

Invitations are given not only on Sunday, but throughout the week in small groups or in personal conversations.

This church simply trusts God’s working through the Holy Spirit and as such is finding the “low hanging fruit” that is ripe for harvest. 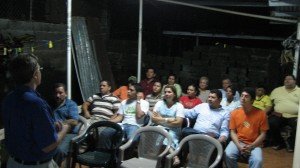 David is a major town about 45 minutes away (down the mountain) from the church.

The church has small groups in that area because of the distance that hinders regular large group meetings.

Pastor drives out to meet with them on a regular basis

We met with some of the small group on the back patio of a house.

Most of those pictured to the right are new believers in the Lord who have come to faith in recent months.

Many had little to no bible knowledge when they came to faith, and are at the stage of faith where they are drinking in all they can get of the teachings about Jesus.

They have a passion for sharing their faith because of the tremendous impact that the Grace of God has had upon their life.  The particular training this evening was on the role of the Holy Spirit in evangelism. 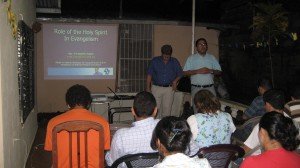 After about 90 minutes of teaching time, we moved into a time of prayer ministry.

We felt that God was leading us to pray for those who do not know Him, and to rejoice in the fact that God has saved us. 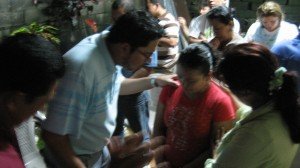 I was surprised once again by the fact that a pre-Christian would come to a workshop on Evangelism.

However, here again, one lady came to the workshop on the invitation of a friend.

During the ministry time, she came forward on her own wanting to start following Jesus to come into her life.

God had been already working in her heart, creating a spiritual thirst for Him, to bring her to a place where she knew her need and only Jesus could satisfy it. 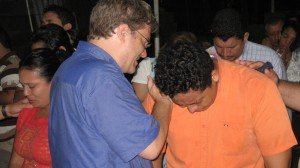 We continued to minister in prayer to people for various prayer needs, such as

The second night, we repeated the same workshop on the Role of the Holy Spirit in Evangelism.  This time, was for the small group in Volcán.  A different set of people came from the local area, including an American lady who had retired and moved to Panama from the US with her husband only 4 months ago.

Again, after about 90 minutes of teaching on the work of the Holy Spirit in Evangelism, we moved into another powerful ministry time.  I was sick and fighting a cold, so the pastor lead the ministry time.

We were led to pray for those who do not yet know Christ, for infilling of the Spirit again to be his witnesses, and particularly felt that God was giving prayer burdens for specific people groups. 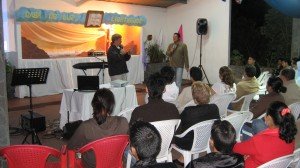 The third evening, both groups from the first and second night gathered in Volcán for part two of the workshop series.

I had recovered from being ill the day before and was much more sensitive to God’s working.

This evening, the teaching focused on paying attention to the Holy Spirit’s promptings to guide you in your evangelism efforts.

It is a variation on the “Fear Free Evangelism” workshop that I offer to churches in the United States.

It uses Philip and the Ethiopian Eunuch as a model of listening to the guidance of the Holy Spirit to position yourself in the right place at the right time. 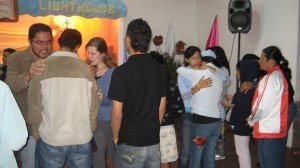 Afterwards we moved into another moving and important time of prayer ministry.

Four or five more people came forward to ask Christ into their life, including the two children of the woman who invited Christ into her life in David, two nights before.

We felt led again to be praying for all sorts of things under the direction of the Holy Spirit. 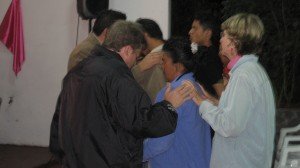 One lady, who had only been a Christian for two weeks, came forward for prayer.

I felt led to pray for physical healing, and physically felt God was working.

I’ve have learned to recognize when God is using me to do a healing work and those signs were present.  I initially was praying for healing, not knowing what for.

After a while, I asked her specifically what for and she reported having some tumors.

As I continued to pray, she reported the physical sensation of her tumors being pulverized, and felt God’s healing upon her.  Of course, we’ll wait for medical verification, but we are confident in God’s healing work. 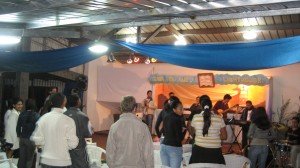 Saturday night, we participated in a Youth Group meeting, together with OM Mission Extreme Team that I had been training during these days.

We had a program that focused on a call to missions, to get beyond the mediocrity of casual Christianity and into giving yourself fully to God’s service no matter where that may take you.

For some, it involves a short term trip in a foreign country.

For others, like us, perhaps moving to a foreign country.  For still others, it might be in your local neighborhood.

If you have a passion to reach the world that is not geared towards one specific people group, then perhaps you are called to be a missions mobilizer — helping others reach their dream of reaching the nations for Christ. 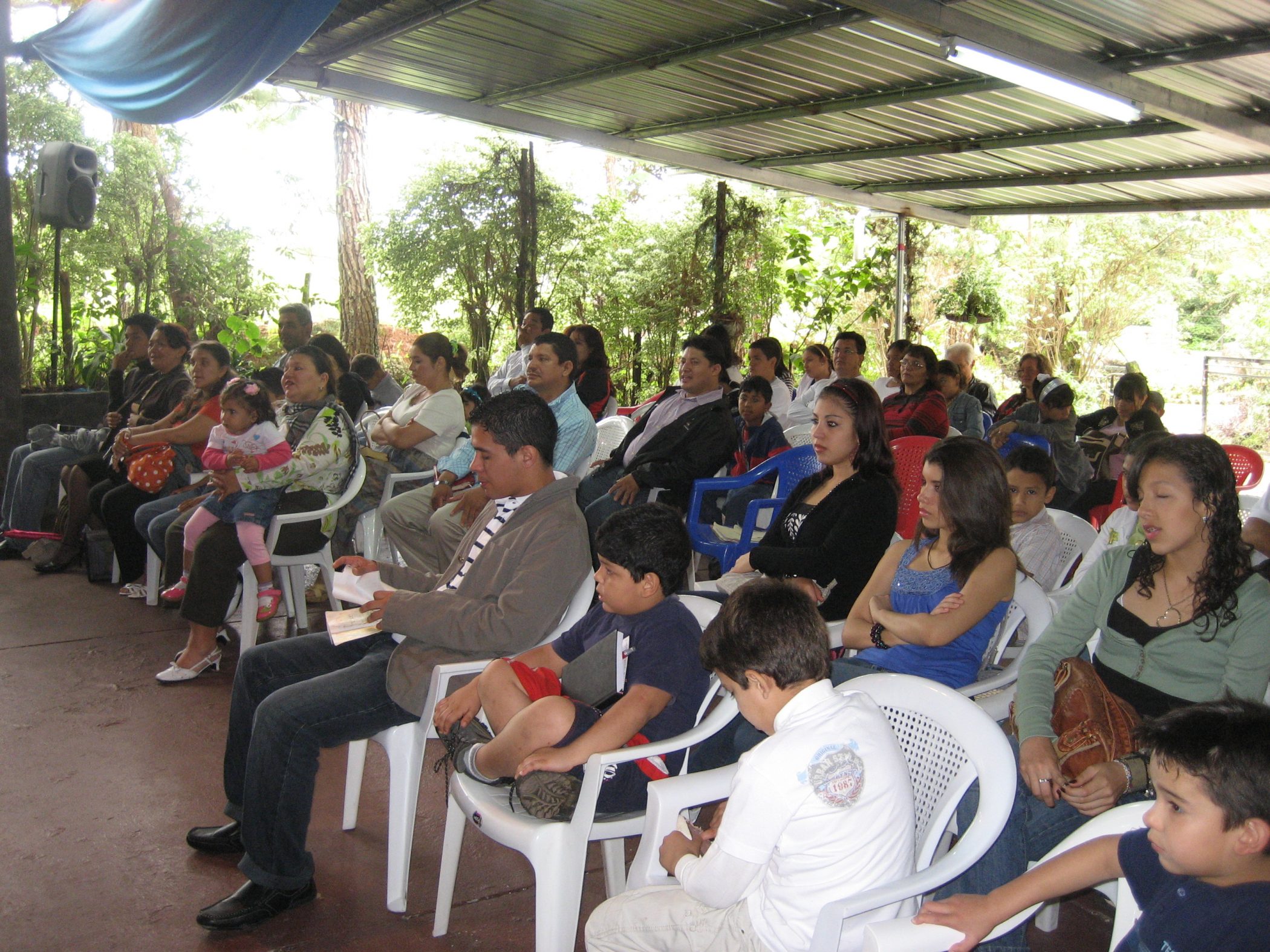 The final day of ministry wrapped up with preaching at Casa de Luz, using a message on Psalm 51. 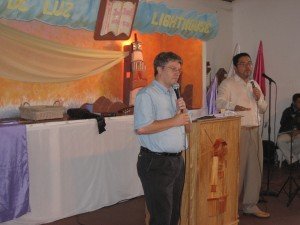 It’s a bi-lingual church so much of the service is translated.  It meets on a covered carport because it doesn’t have a building to meet in.

Many of these people are new believers in Christ and God is doing a wonderful work there.

It was a beautiful morning.

The punishing breezes of Volcan had calmed and the clouds had lifted so that we were warmed in the bright sunlight of that morning.

The message focused on the punishing burden of sin, and the freedom that is found in Christ’s forgiveness.

It is a message that naturally led into a time of repentance and rededication.

The time of prayer ministry after the preaching lasted about 30 minutes and had several highlights. 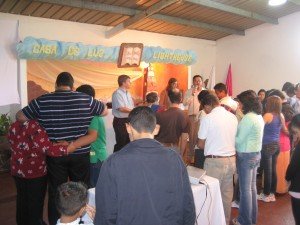 People came forward for prayer about personal repentance, to give or rededicate their life to the Lord.

Others came forward for prayer as well, and several families spent time seeking forgiveness from each other for the broken ways they had been behaving. 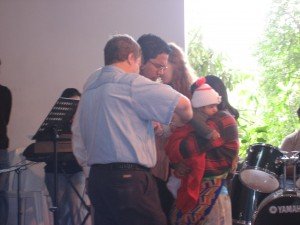 A son sought forgiveness from his father and mom, praying for them as well.

A mom sought forgiveness from her daughter for how she had been behaving.

Brothers and sisters asked to be reconciled to each other.

One family, after being away from the Lord for two years, visited church for the first time and rededicated their life to the Lord.

Others, including one lady from the local indigenous tribe, came forward to give her life to the Lord.  She also sought prayer for her sick child.

God is doing amazing work with this church.

I am humbled to have been a part of it.  I don’t claim any special power, but am simply a vessel in God’s purposes.

I may have the gift of evangelism, but am humbled every time God chooses to use me in leading someone to faith in Christ. 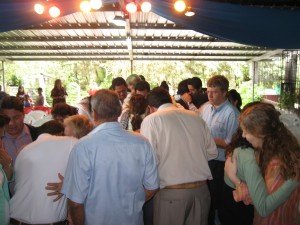 I don’t claim to have any special ability.

But rather I’m an available tool that God has chosen to use, and one that has been positioned at the right place at the right time.

I wasn’t in Volcán on my own doing, but in the sovereignty of God, the door opened and I was there to participate in a work that God was already doing.

What a privilege to see more souls come into the kingdom, to see people experience the power of God, and to ignite the church in the power of the Holy Spirit for missions.

You can see the full photo album at our Facebook Fan Page.

If you want to be involved in supporting the international work of EvangelismCoach.org, tax deductible donations can be made to support our work.  See our support us page.