6 Ways to Mess Up Witnessing to Strangers 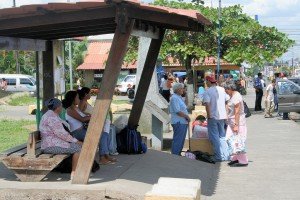 At the bus stop where I was wasting time, a friendly evangelist took the time to talk with strangers, a form of evangelism often called contact evangelism.

I watched and observed and wondered — would I like to be talked to in this manner?

How to destroy the moment.

I admire the woman for taking the initiative to talk and share.  In witnessing to strangers,  she did more than most of do.

I also trust the sovereignty of God to use the words and the tracts this evangelist shared.  God is faithful to His word no matter how it is scattered.  God is more sovereign than our ability to mess up a presentation.

My observations are not faulting her efforts, but my reflections on what I’d do differently.

I think there are lessons for all of us in witnessing to strangers and it spurred me to think about how I talk with strangers.

6 Ways to Mess Up Witnessing to Strangers

The setting was a bus stop.  Most people stay silent while waiting an indeterminable time for the bus.  Or they will use their phone to talk with friends.  While silent, it’s a time for people to think, plan, pray, worry, organize, etc.

She sat next to a gentleman and simply declared: “I’d like to tell you something” and she started into what she wanted to share.

He had to snap out of whatever mental process he was in to engage this stranger who wanted to talk with him.

There are appropriate times to initiate a conversation with a stranger.

Phillip did it with the eunuch.

But a simple declaration is probably not the best way to interrupt somebody’s thoughts.

This may be hard to communicate in words, but as I watched this lady share her faith, I noticed her body language.

While she may have been relaxed in talking with strangers, her body language was not.

It communicated an aggressiveness that likely reflected the urgency she felt to communicate.  It may also have mirrored how her pastor communicates.

She was in charge of the presentation and her body language emphatically said so.

I watched her talk with two people that afternoon.

First, she picked another woman waiting for a bus and asked if this woman had kids.  That was one of two questions asked and answered.  The rest of the time, the evangelist was sermonating with her rapid hand movements and emphatic declarations of truth.

In her monologues, she would ask yes / no questions, and then not even wait for an answer.

The second gentleman could only nod.  There was no time to answer any question.

It appeared to me that he wasn’t really paying attention, but watching the traffic and nodding occasionally to her rhetorical questions.   You know how when people multi-task in front of you — they are not fully listening.  So it appeared with this man.

Each of her monologues went 10-15 minutes, with nothing but one “Yes” from the first woman who had kids and a Yes from the gentleman.

She had the bible and used it, but instead of asking the other person to read, she read it to them and kept talking.

4.  Pick a moment when your audience is trapped.

We’re at a bus stop, so it’s not like people are going to leave.

Your audience is trapped.

The first woman broke out of the trap by getting on the next bus that showed up — that was going in the opposite direction!

For this bus route, this would take her nearly 1 hour out of her way.  People only make that kind of sacrifice when they feel trapped and a need to escape.

5.  Answer questions not being asked.

Her tract was entitled “Why you can trust the Bible.”  Her monologues attempted to answer that question and she referred to the tract and to the Bible regularly.

But from the reactions of the two people she spoke to, I couldn’t help but wonder if they were even asking that question while wondering when is the bus finally going to arrive?

Imagine the random thought stream of a person waiting for a bus:

The evangelist didn’t ask if this was even a question on the minds of the two people she spoke to.  It was an assumption on her part, and I think it was an adventure in missing the point.

As I watched both people she addressed, their defensive body language  indicated to me  little interest in what the evangelist shared.

The evangelist didn’t see any of this.  She continued with her sermonating anyway.

What are some ways that you have messed up in your conversations in witnessing to strangers?