From the Evangelism Bookshelf: unChristian — What a new Generation Thinks 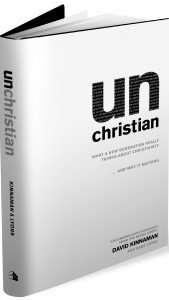 This week, I’ve been reading unChristian: What a New Generation Really Thinks about Christianity… and Why It Matters.

It is the fruit of a 3 year study of perceptions that those not it in the church have about Christians and the church. Simply put, Christianity has an image problem.

One surprise to the researchers was

“many Christians have lost their heart for those outside the faith” (p.14)

The title term “unChristian” takes it’s clue from the most common reaction to our faith:

“Christians no longer represent what Jesus had in mind, that Christianity in our society is not what it was meant to be” (p.15).

38% of those surveyed (2 out of 5) have had a “bad impression of Christianity” and 1/3 said that Christianity represents a negative image with which they would not want to be associated (p. 24).

Another lesson learned from the research is that “Christians have become famous for what we oppose, rather than who we are for (26).

The next chapter of the book looks into the most common points of skepticism and objections to Christianity.

Inside each chapter is an analysis of of the theme, and how the church can reshape the perception.

For example, the term “Sheltered.” The perception is that “Christians are boring, unintelligent, old-fashioned, and out of touch with reality.” The solution is to reshape that perception as “engaged, informed, and offer sophisticated responses to the issues people face” (121).

But reshaping is not playing with semantics. The book is a call to action and provides practical steps and suggestions for pastors, church leadership, and lay people.

As you seek to engage people around you, this informative book will help inform you as to some of the reactions that people may have and how to respond to them.

Order your copy of unChristian: What a New Generation Really Thinks about Christianity… and Why It Matters from Amazon.

How do you start Witnessing to Somebody?
Next Post:How to Share Your Faith During Thanksgiving