How William Wilberforce Shared His Faith

The story has been fantastic in unfolding the formative events in his life.

I’ve been blessed by reading about his conversion, the influence of other famous leaders from that time like John Newton (the song writer of Amazing Grace), Charles and John Wesley, and George Whitefield.

I quote from the book (and reformatted for online reading and emphasis added):

William Wilberforce’s conversion to Christianity in 1785— what he called his “Great Change”— was without question for him the central and most important event of his life.

Indeed, as far as Wilberforce was concerned, faith in Jesus Christ was the central and most important thing in life itself, so it can hardly surprise us that sharing this faith with others was central and important to Wilberforce too.

And so, everywhere he went, and with everyone he met, he tried, as best he could, to bring the conversation around to the question of eternity.

Wilberforce would prepare lists of his friends’ names and next to the entries make notes on how he might best encourage them in their faith, if they had faith, and toward a faith if they still had none.

He would list subjects he could bring up with each friend that might launch them into a conversation about spiritual issues.

He even called these subjects and questions “launchers” and was always looking for opportunities to introduce them.

His efforts to draw his friends into conversation about “first things” sometimes failed, and the objects of his kindness may on occasion have felt more like his quarry.

But in many cases Wilberforce’s conversations bore great fruit, and some who hadn’t known it was possible to be sincerely Christian and yet witty and charming found in Wilberforce an inspiration.

If he, being so brilliant and sociable and wealthy— and a close friend of the prime minister’s!— could be so serious about his faith, perhaps it might be acceptable after all.

It was in his public person that Wilberforce may have done the most to “make goodness fashionable.”

An indisputably captivating figure who defied easy categorization (not that many didn’t try), Wilberforce became something akin to an icon for serious Christian faith.

But he was certainly no moralizing lummox.

His brilliance and good cheer and wealth and charm and obvious earnestness made him too slippery to grasp easily.

For a nation that knew serious Christianity principally through the black-robed figures of John Wesley, John Newton, and George Whitefield, Wilberforce was an undeniably fascinating and intriguing figure.

The Evangelism Habits of William Wilberforce 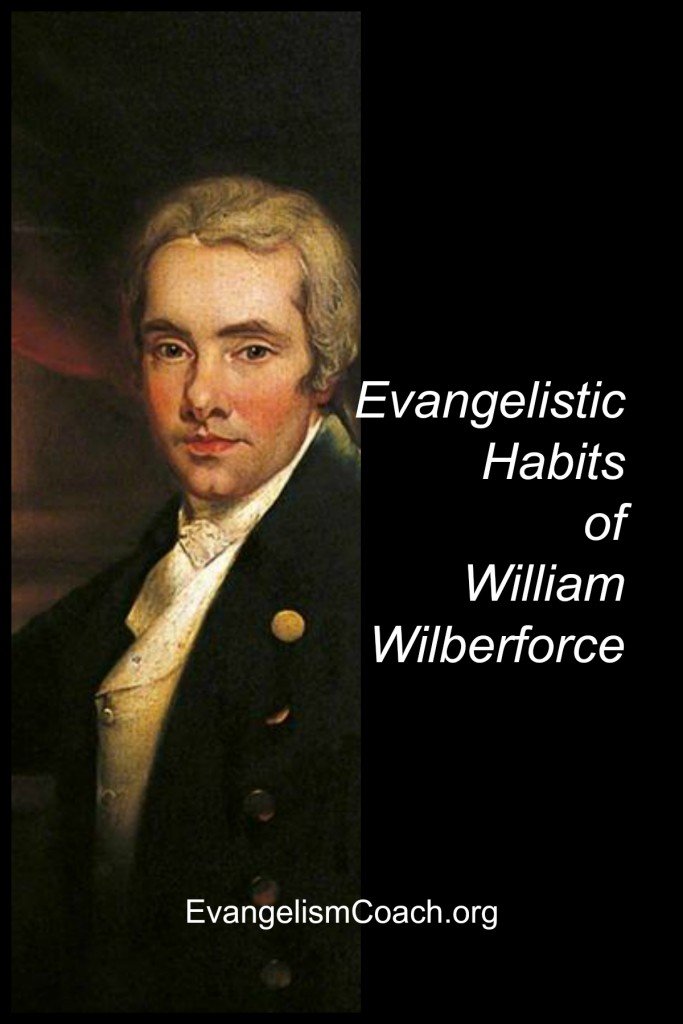 Wilberforce lived out much of what I’ve compiled in this article: 10 ways to kickstart your Personal Evangelism this Summer, but I want to highlight a few items here

“I have no non-Christian relationships” confessed one of my evangelism coaching clients (shared with permission).

“I was taking an inventory of my personal relationships and discovered that I had surrounded myself entirely with Christians.”

In my experience, I could easily guess that many of these, if not all, would confess the same lack of relationships with people who do not walk with the Lord.

A Christian without an unchurched friend is like a dash of salt in the ocean: it doesn’t do anyone any good and, frankly, no one even knows it’s there. — Bill Tenny-Brittian, Hitchhiker’s Guide To Evangelism

Wilberforce realized that he had influence among his non-believing friends.  His awakening to faith did not destroy his prior relationships nor remove him from being an influence for Christ.

We might mentally agree to the the idea, but to actually make the list and use it may still be a challenge.

Here is one way to think through how to make this prayer list.

The idea is to get beyond the generic “I pray for Jose and Martha” and into more specific areas.

3.  He looked for their spiritual thirst

Wilberforce wondered about how to have a conversation with them.

People are in different places in their spiritual journey.  As Wilberforce wrote each name, he pondered what might their next step be?

If they are hostile to God, how would he pray that they may start seeking God?

If they are seeking God, how can would he pray that they would talk with him about how he found God?

If they are studying the Bible in their search, he would like to pray that God’s word would speak.

In other words, Wilberforce seemed to pray in accordance with the work that God might be doing in their spiritual life already.

He looked for those divine appointments.

He listened for spiritual thirst.

Sometimes, Wilberforce took the initiative with his conversation launchers.  Other times, he was sensitive to topics or conversational threads that could bridge to spiritual matters.

Wilberforce image: In the Public Domain, Painting by John Russell

8 Lessons from My Church Shopping Experience
Next Post: 7 Ways to Pray for Your Lost Friends (Plus 17 more)