Gospel scripts have their role to play in helping to explain the gospel simply and clearly.

Over the years, various scripts have been developed, such as

Some of these have even launched a whole ministry surrounding it’s training, distribution, and development.

During this week, we’ll take a look at a few of them.

The Key to Using Gospel Scripts

The key to using gospel scripts is to know ONE “inside out”so that your explanation is crystal clear.

The idea is that you can use it at any given moment, or as they say, you can “do it in your sleep” (a phrase meaning that you can explain the script without having to think too hard because you are so familiar with it).

You can focus on an aspect of the script that is appropriate for the conversational context you are in.

Once you are deeply familiar with one, then add another one to your skill set.

A self declared non-Christian friend asked me one time:

“Chris, what is the Gospel?”

I had the perfect opportunity to explain the gospel simply and clearly.

Instead, my explanation was a clear as the muddy Mississippi River during a flood.

After that moment, I decided that I needed to learn a script so that I’d not be caught unprepared again.

Each script is focused an aspect of the gospel.

By the very nature of the bullet like focus of a gospel script, there will be some debate over accuracy.

Theological websites are abundant in ripping apart scripts for lack of some feature.  Some suggest some additive to make the script more theologically complete in their theological system.

Is the Issue Relevant?

Some of the evangelism training scripts start with heaven, that eternal place where we can experience eternal life with God.  Evangelism Explosion, for example, assumes that people want to get in.

For decades, the phrase, “If you were to die today, do you know for sure you would go to heaven?” was associated with evangelical attempts at sharing their faith.

But Lifeway research wondered if people are actually asking that question.  Nearly 40% of their respondents don’t even wonder about heaven.  Read the full stats here. 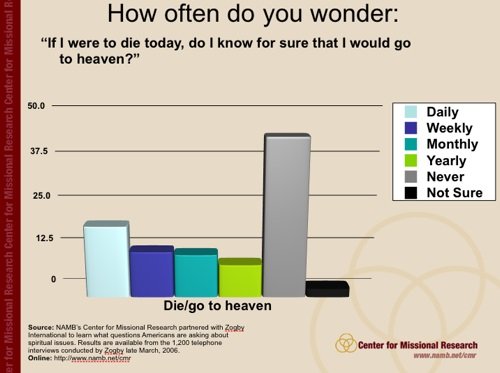 Does assuming people want to go to heaven make for a good starting point in a cold conversation?  The statistics suggest not really?  Lifeway’s research suggests:

It appears that more people are thinking about meaning and purpose than life after death. (And it is important to note that the Bible provides the answers to all these questions.) 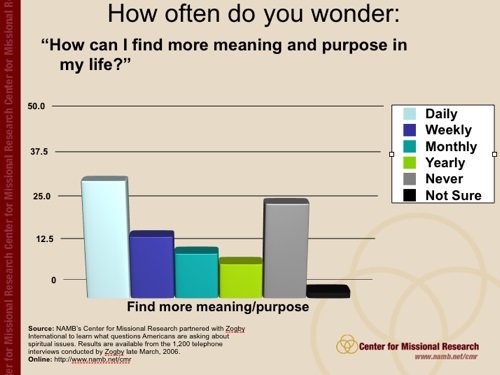 Flexibility in the Script

The role of the evangelist is not to follow the script like a cake recipe.  Gospel scripts are not designed that way.  Rather, they provide a primary outline for your conversation.

This allows that your conversation partner may want to linger on a certain point a little longer, which in turn suggests the evangelist takes the time to develop a particular point a whole lot further.

This is where knowing the Script inside and out helps the evangelist from getting lost.

Take the freedom to go off script to develop a particular theme appropriate in the context, then return to the script outline.

Which script of those listed above do you know inside and out?

If you don’t know one, commit this week to learn one.