Who do you see? Do you have the eyes of Jesus?

Yesterday, I returned from doing ministry training in Nicaragua.

We worked with nearly 200 ministry leaders from 6 different Central America countries plus the United States.  Our team had some plenary sessions during the training camp.

Here is a summary of the message I gave the last night.

These are more notes, rather than a manuscript.

Who did Jesus see?

As Jesus went on from there, he saw a man named Matthew sitting at the tax collector’s booth. “Follow me,” he told him, and Matthew got up and followed him. Matthew 9:9

We know little about Matthew, other than that he was a tax collector.  From historical studies as well as biblical evidence, we can assume certain things about him.

When Jesus saw Matthew – what did He see?

As an evangelist, I long to see people who are as ready to follow Jesus as Matthew was that day.

When I do encounter people who are ready to start following Jesus, it’s a great joy to be part of that process helping them start.

Who did the Pharisees see?

Matthew had Jesus over for dinner, and more tax collectors and other “sinners” showed up.

People who would likely never walk into a synagogue of that day, nor a church in our day.

When the Pharisees saw this, they asked his disciples, “Why does your teacher eat with tax collectors and ‘sinners’?” Matthew 9:11

When the Pharisees saw Matthew – what did they see?

A Prostitute or a Worshiper

A prostitute crashes dinner and pours out her gratitude on the feet of Jesus.

When the Pharisee who had invited him saw this, he said to himself, “If this man were a prophet, he would know who is touching him and what kind of woman she is—that she is a sinner. Luke 7:39

Who did the Pharisee see? – A sinner.

Who did Jesus see? A redeemed sinner, expressing gratitude.

The fact is, Jesus knew who she was.

Jesus saw a future disciple, the Pharisees saw a sinner.

Jesus saw a redeemed worshiper, the Pharisees saw a prostitute.

Jesus knew who you were and called you.

Jesus saw you and saw a disciple

All of you here are Christ followers.  At one point, you weren’t.

When He called you – he saw a future disciple, a worshiper.

Perhaps that call came through a Young Life worker, or through a Pastor.

Perhaps that call came at a camp, or in a church.

Jesus saw you and didn’t write you off.

Jesus saw you and called you to follow him.

Jesus saw the crowds and called for prayer.

While doing ministry on a regular basis:

When he saw the crowds, he had compassion on them, because they were harassed and helpless, like sheep without a shepherd. Then he said to his disciples, “The harvest is plentiful but the workers are few. Ask the Lord of the harvest, therefore, to send out workers into his harvest field.” (Matthew 9:36-37)

Jesus saw the crowds – what did he see?

People who needed him.

When Jesus saw the crowds, he felt compassion – his heart broke.

Out of that – he called for prayer.

As a ministry leader in your town, what do you feel when you look over your city?

Do you see the harvest?

Do you have the eyes of Jesus to see with compassion? 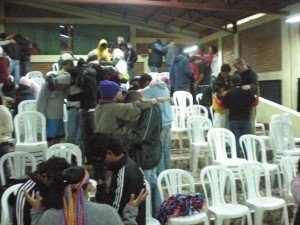 Get into groups by city and begin to intercede.

Ask God to give you His eyes to see the city as he sees it.

Ask God to help you feel His heart for the city.

Ask God to send you into the harvest field as a worker.

20 ways to Support Evangelism In Your Church
Next Post: Fearless Evangelism is Possible