Are Unbelievers Present at Assemblies in Acts? – Part 2 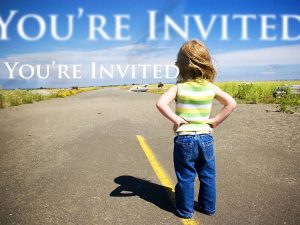 As I continue to look in Acts, I want to see what I can find that can help me answer the question:

Should we invite the unsaved to church?

Since I practice church invitations as a tool in my personal evangelism habits to help people discover the grace of Christ, I want to examine the biblical evidence in support or rejection of this practice.

My point in this series is to look at the gatherings of the early church in the book of Acts to see if there is any clear evidence one way or the other.  Knowing that Acts is not written to answer my question, I have to draw conclusions from interpretations.  Part 1 of this list is here.  All Scriptures cited are from the NIV.

In those days when the number of disciples was increasing, the Hellenistic Jews among them complained against the Hebraic Jews because their widows were being overlooked in the daily distribution of food.  So the Twelve gathered all the disciples together and said, “It would not be right for us to neglect the ministry of the word of God in order to wait on tables.  Brothers and sisters, choose seven men from among you who are known to be full of the Spirit and wisdom. We will turn this responsibility over to them 4 and will give our attention to prayer and the ministry of the word.”” (v.1-4)

The selection of the first deacons is a gathering of the disciples to solve a leadership problem. There is no preaching or worship indicated, but there is prayer and the setting apart of the first 7 deacons.

The only people talked about in this passage are the believers.

On that day a great persecution broke out against the church in Jerusalem, and all except the apostles were scattered throughout Judea and Samaria.  Godly men buried Stephen and mourned deeply for him.  But Saul began to destroy the church. Going from house to house, he dragged off both men and women and put them in prison.  (Acts 8:1-2)

The believers are collectively called “the church in Jerusalem” but the term is not used to describe a gathering or meeting, but the believers themselves.

When the crowds heard Philip and saw the signs he performed, they all paid close attention to what he said. For with shrieks, impure spirits came out of many, and many who were paralyzed or lame were healed.  So there was great joy in that city

Philip preaches to crowds who gathered to hear the word of God proclaimed.

Was that “church” or a meeting in the public square?

Were some of the believers with him to help him in the preaching, interceding for him, church ushers as crowd control, or was Philip all by himself?

Could this have been an assembly with non-believers present, or would this be considered something else besides a church gathering?

I think the danger can become theological hair-splitting when deciding if this gathering of the crowd was “church” or “not church.”

This is the story of Simon the Sorcerer.  I’ve seen this passage used to justify a believers only assembly, so I’ll share my observations.  Philip had been preaching the word of God in power ministry before the crowds.

Simon gave evidence of conversion (Simon himself believed) and even took baptism and started following Philip (v. 13).   This may be evidence of the exclusion of non-believers until they believe and become part of the group.

It could also be said that Simon had not been interested in following the disciples and so would not have been part of the group until he got involved, saying nothing about the practice of a believers only gathering.

When the apostles in Jerusalem heard that Samaria had accepted the word of God, they sent Peter and John to Samaria.  When they arrived, they prayed for the new believers there that they might receive the Holy Spirit, because the Holy Spirit had not yet come on any of them; they had simply been baptized in the name of the Lord Jesus.  Then Peter and John placed their hands on them, and they received the Holy Spirit.

When Simon saw that the Spirit was given at the laying on of the apostles’ hands, he offered them money and said, “Give me also this ability so that everyone on whom I lay my hands may receive the Holy Spirit.

Peter and John had come to the city to investigate how Samaria had started receiving the word of God.  It could be argued that Peter and John met with the believers collectively in one place as the church.

The rebuke of Simon, as well as the rebuke of Annanias and Sapphira could be seen as cases of church discipline.

The point of Luke’s story is the focus on Simon, and the outpouring of the Holy Spirit in Samaria, not on describing in full details of one particular gathering of believers.

There is no mention of the presence or exclusion of unbelievers in these gatherings in Samaria.

When he came to Jerusalem, he tried to join the disciples, but they were all afraid of him, not believing that he really was a disciple.

I’ve seen the passage used to justify the exclusion of non-believers since the disciples would not let Paul join their meetings at first.

But Luke gives the real motive – they were afraid of Paul.  The man sent to persecute the church is now a believer?  Unbelievable?  Are you sure?  Are the stories true?  If we let him join our meetings, will he carry us away to jail?

The exclusion is not about what Paul believes or doesn’t.  The matter is about fear, as clearly stated by Luke.  The incredulity of the disciples over Paul’s conversion gave them pause.

I invite you to chime in with your thoughts.  Please stick to the passages cited for this conversation.

Related posts:
Are Unbeliever Present at Assemblies in Acts? -- Part 1
15 Strategies to Increase Number of First Time Visitors
Church prays for passion for the lost
How to Get a First Time Church Visitor
A great tool to help your members make an invitation to church
Originally Posted: July 18, 2013 Category: Grow Your Church, Personal invitationsTag: invitations, invite a friend
Previous Post: