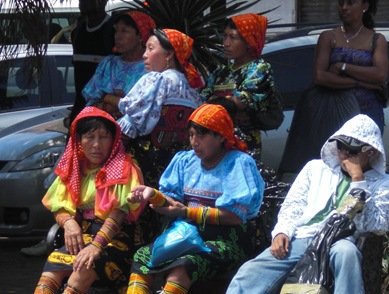 Being cross cultural missionaries, I run into a clash of worldviews.

Likewise, teaching in a missions institute on worldviews, I seek to offer explanations and suggest strategies to contextualize the gospel.

We may not see it a lot in the US, but a common worldview I encounter when I minister in Latin America is animism.

Perhaps you encounter it in your conversations with those outside of the church.

We see it in the US when one looks into some of the pagan or new age religions.  Samples from reality TV shows, reports on summer solstice celebrations, and personal contact that I have with practitioners of these religions show me that an animistic worldview is at the root of how they interpret their world.

Animism is a worldview or system of belief where every thing: people, animals, plants, rocks, natural forces like thunder and lightening, mountains, rivers, have a soul or spirit (Wikipedia).

Inanimate objects or natural forces are treated as if they have a soul, or are animate.  Humans are a part of nature rather than superior to it or even separate from it.  According to Wikipedia, rituals are for survival to win the favor of the spirit or ward off malevolent spirits.

According to Darrow Miller in Discipling the Nations: The Power of Truth to Transform Cultures, animism’s solution to poverty and hunger lies outside the spiritual world.

Natural disasters are manifestations of irrational divine or soulish forces in the universe.

Bad things happen because the gods are angry.

Thus rituals of appeasement keep the peace.  Mankind must live in harmony with the gods.  Other than that, nothing can be one (p. 61).

It’s not my place here to write an academic paper, but to raise a question.

The challenging task of contextualization

Part of the missionary’s task then is to contrast that worldview with a biblically theistic one and help provide an alternative explanation to the world.

What would you do?

Here is the setting (and a real life one from my experience):

You are the missionary speaking with an indigenous woman who has an animistic worldview.

She is afraid of the river alligator.  You’ve learned that her fear is based in the god of the alligator who might steal her child in the night.

To keep her child safe, she offer sacrifices of some kind to the alligator in the river.

What would you do?


How would you contextualize the gospel?

Does starting with “You are a sinner in need of a savior” make sense?

Or does one take the time to help such a person learn from Scripture?

Does one use the academic language of worldview, or simply show how the Bible interprets the world differently?

What would you do?  Share your thoughts in the field below