I was in Panama last month on a business trip.

I had lunch with one of the people that I met.

He was a German business man living in Panama.

He left Germany behind and trying to start his life over in Panama on the crest of a real estate building boom.

This is when an example of spiritual thirst appeared.

He opens the door to potential conversation

The person who arranged for us to meet mentioned that I was a minister.

It was a surprise to this German man that I could be a both business man and a minister.

After expressing his surprise, he quickly volunteered the following information:

he wasn’t walking in the ways of the Lord and that perhaps we should have lunch.

His frank admission seemed to come from left field.

Is that spiritual thirst? (Read the tutorial).  Yes. 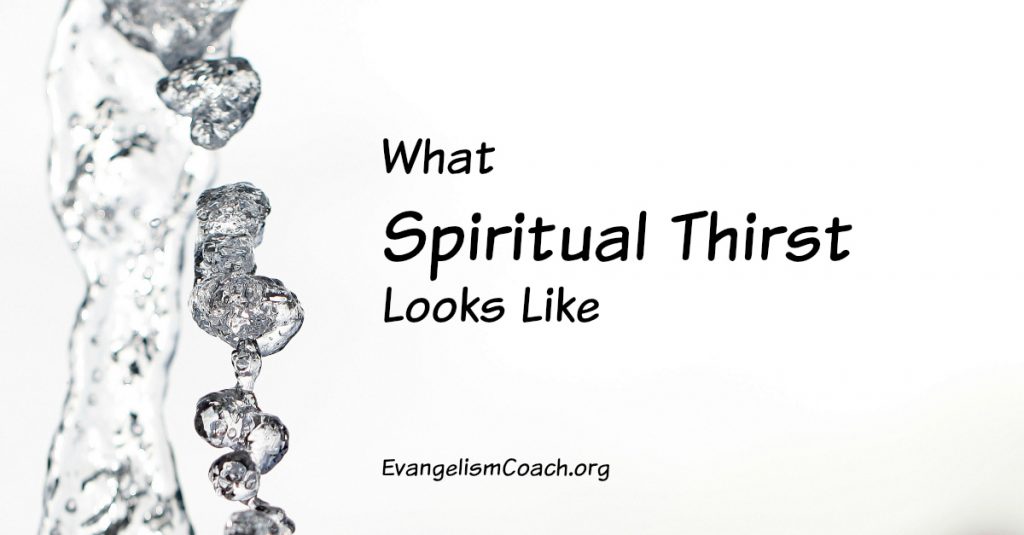 I’ve learned that when people suddenly open up about their spiritual condition, it’s an invitation to further discussion.

I scheduled lunch for the next day!

Over lunch we talk.

He tells me his story that clues me in that he’s a workaholic who has paid an enormous cost for this addiction.

Along the way, some of his claims:

In listening to his tone of voice, reading his body language, and listening between the lines of what he said, the spiritual thirst became clear to me:

He wasn’t yet seeing that his personal restlessness was a spiritual longing.

The restlessness in his heart is not only a symptom of his brokenness, but also of his need for the Lord.

Although I could clearly see his need for the Lord to fill that restlessness, he wasn’t connecting the dots yet.

For this man, the next step in his journey towards Christ is to connect the dots.

His restlessness reflects the longing of the human heart to find the satisfaction that can be found only in a relationship with God.

The task then becomes asking the Lord to help this man connect the dots.

Ecclesiastes was much like this man, trying to fill the emptiness of the human heart with something meaningful.  (I elaborate more on Ecclesiastes here)

I began to share with my lunch friend about a wise man who once tried to fulfill his heart with everything.

But at the end, he discovers that only a relationship with God will fill that void, that restlessness.

We talked and talked about what this wise man discovered.

Using questions inspired at the moment, along with my knowledge of Ecclesiastes, we had a long conversation that effectively amplified this man’s spiritual thirst.

It was clear to me that this man was not aware of the conviction of sin that leads to repentance.  He was not at that place.

Instead, I left him with a next step:

To read the book of Ecclesiastes and ponder it’s meaning.

I have never seen him again.

How would you have interacted with him?

Panama Image Source: I took it 🙂

Invite Your Friends to Church: 10 Ways to Pray For Those Invitations
Next Post:How to Give An Extra Large Welcome in an Extra Small Church