A Sinner’s Prayer is not The Goal of Evangelism

His prayer 25 years ago failed.

My friend had obediently prayed with the well meaning evangelist.  My friend repeated the phrases the evangelist said, one after the next, confessing his sin, inviting Jesus into his heart.

There was no spiritual transaction,  no renewal in his heart, no conviction of sin, and no awareness of the power of God’s grace.

“I don’t know what I was praying.  It was just awkward.”

Let me back up and tell the story. 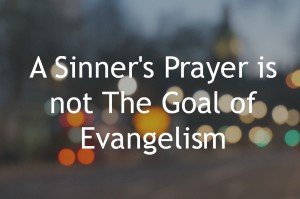 My Friend prayed the Sinner’s Prayer, but . .

My friend was an international exchange student over 25 years ago.

He left his home, his country, and his culture to experience a school year in the United States.   Exchange programs like the one he participated in can have long life benefits and friendships.  For example, my family remains in contact with the exchange student we hosted when I was in 3rd grade.  Others don’t work out so well.

My friend was hosted by a Christian family who probably wanted to change the world for Christ.

Many followers of Christ open their homes to foreign exchange students with an idea of sharing Christ with students and praying for their salvation.  It can be an awesome relational evangelism strategy.  When our family hosted students, none of us were followers of Christ so we didn’t even think about these things.

The host family started taking him to church with them on a regular basis.

Being a polite guest, my friend attended services, though he doesn’t remember much about them.

After a few weeks of being in the house of his host family, my friend was invited to pray with the head of the household.

Being a polite guest who didn’t want to offend his host, my friend complied with the wishes of the evangelizing gentleman.

The man would pray a phrase, my friend obligingly complied and repeated after him.  When the Amen was pronounced, the host congratulated my friend for praying the prayer with him.

My friend tells me his thoughts on the matter:

The next Sunday, my host got up and told the church that I had prayed with him.  They all applauded.  Afterwards, people were coming up to me to say stuff like congratulations, welcome to the family.  They’d shake my hand, give me a hug, or pat me on the back.  That was weird.

Chris, what was that all about?

My friend “prayed the prayer” but remains a spiritually adrift agnostic.

The goal of personal evangelism is not a sinner’s prayer.

The goal of personal evangelism is not a prayer to receive Christ.  Saying a sinner’s prayer is not “a get of hell free” card.

I’ve seen too much abuse of this practice, where it is reduced to a superstitious formula that gives false hope.

I’ve watched preachers give altar calls after sermons where the gospel is not even given, inviting people to raise their hand, pray this prayer, and then come forward for a free gift.

One preacher even offered a Hillsongs CD to someone who raised their hand to receive Christ.   My jaw dropped.

The head of the household where my friend stayed appears to have reduced the sinner’s prayer to a spiritual transaction, apart from the gospel, apart from any understanding of sin, apart from any comprehension of the amazing grace of God.

A Sinner’s Prayer without conviction of sin is worthless

You could be out doing contact evangelism with random strangers.

You could be taking the gospel door to door, or taking the slower road via relational evangelism like the disciples may have.

The temptation will be to “get hands raised,” “get a decision,” or “get a response.”

I remember that temptation.

I remember doing contact street evangelism in Austria in the early 90s.  We did a short drama, a short preaching to the crowd that gathered, and then quickly invite people to raise their hands to follow Christ.

To be the street preacher, I had learned to share a simple gospel script for the post drama conversations,  such as the Ten Commandments, or the Bridge Illustration.

I had less than 5 minutes to connect the drama to the gospel.  Some of those 5 minutes were taken up by the translator who repeat every word I said its German equivalent.

One girl raised her hand.  Afterwards, she approached me said  in barely understandable English “I want to join your movement.”

Reflecting on this story nearly 20 years later, I doubt there was a genuine conversion.

She wanted to join our movement, to find a cause.

She didn’t know the gospel and I doubt I got the full gospel shared in my 5 minute preaching.

While well meaning and energized on the task of saving souls, I learned a valuable lesson on that mission trip.

I had reduced the sinner’s prayer to a superstitious charm.

The goal of personal evangelism is to Make a Disciple

Joyfully sharing the good news of the sovereign love of God,
and calling people


The goal of personal evangelism as I define it is discipleship.

The goal of evangelism includes the ingredients of

Fruitful evangelism happens when a person truly sees their need of Jesus, as in the stories of

Fruitful evangelism happens when the Holy Spirit is at work revealing sin, revealing the love of God, and helping a person respond.  You see that in the story of Zaccheus.

Fruitful evangelism is obvious when there is an “I get it” moment, aswhen a person is overwhelmed by the grace of God.

There is a genuine conversion and discipleship starts.

That evidence includes a desire to connect with a local church, a desire to start read the Scriptures, and a growing awareness of personal sin and God’s holiness.

Where A Sinner’s Prayer served its purpose

We once did contact evangelism in a local park.

The Spirit of God had prepared a woman well in advance to receive Christ that afternoon.

When we spoke to her spiritual thirst through our dramas, she felt her need for Christ.   Tears had formed in her eyes.  Hope was rising in her heart.  Conviction of the brokenness of her own sin swirled the emotions from deep places.

She sought out our pastor’s wife immediately after the short talk when the drama was over.

This is where the sinner’s prayer served its purpose.  It allowed her to respond to the power of God that was convincing her of sin and her need for Christ.   She prayed with our pastor’s wife to invite Christ into her life.

That week, she started attending our church.

She took baptism a few months later and is now regularly sharing her faith.

A Sinner’s Prayer can help start a disciple’s growth

Praying a sinner’s prayer of surrender might be the gateway to discipleship.

It was for this woman.   It was the end point of the process of evangelism.

Helping a person praying such a prayer can be a way to help a person respond to the grace of Christ.

A sinners prayer can mark the beginning, but is not the guarantee of a disciple.

The goal of evangelism is not a sinner’s prayer, but a growing disciple.

Related: Evangelism without discipleship is incomplete.

Overcome Your Evangelism Fears: “I don’t know what to say”
Next Post:20 Church Hospitality Goofs and How You Can Avoid Them