Statistics on spirituality of twentysomethings 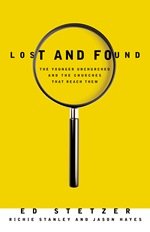 For youth pastors, young adult pastors, and others who work with this group, this research gives current insight based on survey data.  Lifeway has published a podcast with it, found at Stetzer’s article.

In fact, 73 percent of unchurched twentysomethings consider themselves “spiritual” and would like to know more about “God or a higher supreme being.”

This is 11 percent higher than among unchurched individuals who are 30 years old and older.

They are also significantly more likely to attend church or a small group than older, unchurched generations.

This research is included in my newest book, Lost and Found: The Younger Unchurched and the Churches That Reach Them, co written by Richie Stanley and Jason Hayes. You can get some more numbers and thoughts from the authors of the book in this article at Lifeway.

The research suggests that the church is not doing well enough in meeting their needs, and looks into why they do or do not attend.

Definitions used in this research:

What they are looking for is what the church is called to be.

They have more historic beliefs such as Jesus actually rose from the dead,  but a higher sense of pluralism suggests they may not connect them with the local church.  81% believe in God or a surpreme being, but 58% suggested there is no difference between the dieties of other religions.

Listen to the full 20 minute podcast — I found it very interesting.

“The most encouraging take away, when a pastor looks into what young adults are looking for — any church despite their style or music — I can really help our church meet their needs: relationships, authenticity, social action, mentoring”

From the related article at Lifeway:

Young adults would also react positively to invitations from friends to study the Bible. Survey respondents were asked to affirm the following statement: “I would be willing to study the Bible if a friend asked me to.” Sixty-one percent of 20-somethings responded, “Yes.” That’s about 20 percent higher than affirmative responses from older generations.

The survey also revealed opportunities for churches among the 20-something crowd. According to the survey, 63 percent of young adults said they would attend church if it presented truth to them in an understandable way “that relates to my life now.” Only 47 percent of respondents 30 years old and older agreed.

Unchurched young people also want to know the church cares about them. The survey found that 58 percent of 20-somethings would be more likely to attend if people at the church “cared for them as a person.”

The national phone survey included 900 unchurched respondents ages of 20-29 and 502 respondents age 30 and over. The survey provides a 95 percent confidence that the sampling error is 2.5 percent.

Quotes from Evangelism and the Sovereignty of God
Next Post:Community Evangelism Webinar Resource Page