What is your reaction to the Noah Movie?

After discussing it with my family over a dinner, we concluded that there are likely 3 main reactions from the world of Christians to the Noah movie.

Two of them will be useless for the kingdom of God.

Christians should seize the opportunity to talk about a biblical story and contrast it with Noah movie, which is not based on the bible story but other sacred texts (read this researched article).

I’m one of those Christians who emptied my wallet this weekend to take my family to see this butt-numbingly long movie that was a little darker in its outlook than I expected.

I didn’t expect to see a biblically faithful retelling of the story, so I wasn’t disappointed that it wasn’t.  I’d rather have an intelligent conversation my friends them because I SAW THE MOVIE rather than parrot what critics and supporters say. 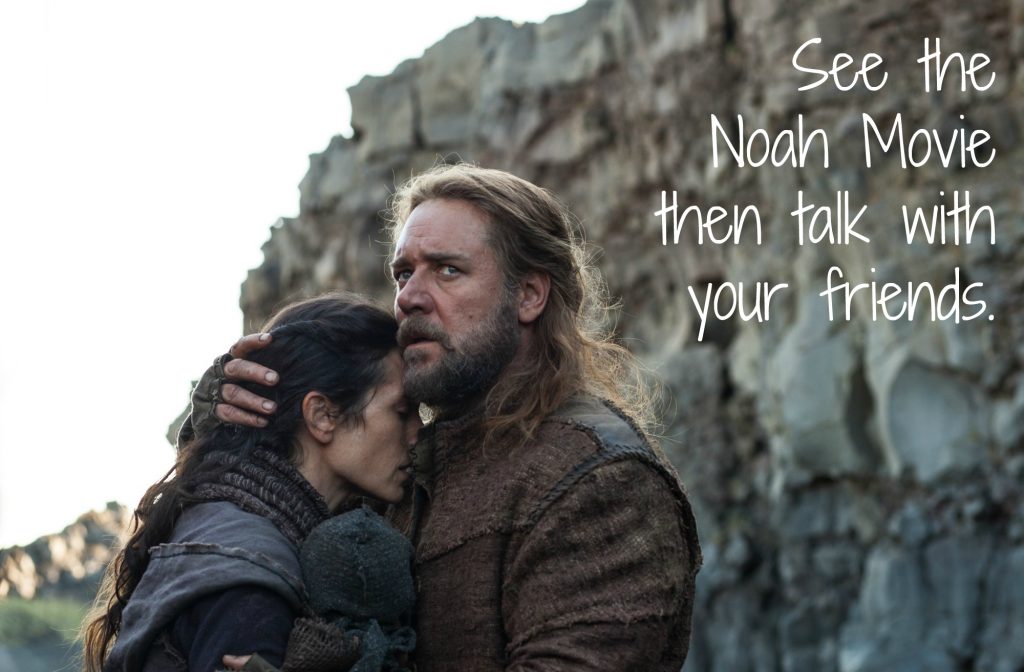 The Noah Movie is not 100% faithful to the Biblical story line.

Some of the details were done in accordance with the Bible:

But some of the details are changed for the story:

Based on historical events, but the story lines are created by Hollywood for dramatic tension and plot development.

Others who are familiar with the director and Gnostic sources have pointed out the multiple connections to the Kaballah and the book of 1 Enoch (read here).

3 Reactions to the Noah Movie- and 2 of them are useless.

So based on the liberty with the main story line and use of non biblical sources for film elemets, here are three types of Christian reaction:

1.  Some Christians will complain that Hollywood is forcing an evil film upon the culture.

Critics have come out of the wood-work and claim that Hollywood has messed up a Biblical epic.  They holler and whine that the film is not faithful to the biblical story line.

I would agree with them.  The movie bears very little similarity to the biblical story.

But it’s pointless to boycott and whine about the Noah movie because of the liberty the directors take with the movie.

In fact, I’d argue that whining and complaining about this movie makes Christians look pretty foolish.

Calling the movie a blasphemy is harsh and dumb.

Some of that criticism makes the Noah movie seem like a satanic plot to deceive Christians, force a competing worldview on a gullible culture, and an evil Hollywood attack on people of the Christian faith – it’s persecution. . .

In several Linked In groups I’m a part of, people who haven’t even seen the movie are throwing stones at the director, the movie, and people who do see it, descending into name calling – calling a Christian like me “deceived” or “stupid” to spend money.

I won’t agree with their claim that the Bible is under attack.

I won’t agree with their claim that the movie equates to blasphemy.

2.  Some Christians don’t read the Scriptures and will believe the story is pretty true.

I recognize there are a lot of church goers who call themselves Christians, but have never read the story of Noah.

This is a gullible group that will take the movie telling of the Noah story as the possible truth of what really happened.

They’ll believe it like the retelling of Apollo 13: “Based on a true story.”

Many individuals not familiar with the Bible might could believe that Watchers (rock creatures who were fallen angels) built the Arc and then fought off the people of the land as they tried to enter the Arc when the flood came.

Having no desire to read the Word of God, they will accept the story as told by the directors as the truth.

As such, the movie will not have an impact on their life, only their wallet.

This ignorant reaction is pointless as well.

It shows lack of discernment or even care about the actual story.

3.  Some Christians will seize the opportunity to help others turn to Scripture and read the Noah story.

This is where I come down.

I chose to watch the movie so I could talk about it first hand.

We went home after seeing the movie and read the story as a family.

We talked about what the Word of God had to reveal about the story of Noah and our kids made comparisons to the movie version.

This will give all of us the chance over the next few days to participate in conversations with our friends about the Noah movie.

Rather than complain about persecution, deception, and the evils of Hollywood, we can

It is true that the movie Noah doesn’t present a biblical worldview on  its view of God, of sin, of deprivation, nor of Sons of God.

Rather, I can use the movie to open conversational doors to biblical truth.

It comes down to discernment

Your own approach to the movie will vary.

I have chosen the way that will allow me to participate in spiritual conversations with my peers who will go and see the movie.

My faith in Jesus is not shattered because of the artistic license.

My faith in Jesus is not shattered because the story in the Noah Movie has little basis in Scripture.

My faith in Jesus is not weakened or harmed because of the Gnostic religious elements in the Noah movie.

If you have discernment because you read the Scripture, you’ll see that the movie of Noah is not a faithful bible telling.

If you have discernment, you’ll hear the spiritual conversation opportunities around you.

If you have discernment, you’ll realize that this film will allow you those conversational opportunities to talk with people about the Scriptural truth.

With discernment, you’ll know that your faith is based on Jesus, not on a film directors interesting interpretation of a small  but significant Bible story.

5 Reasons Every Christian should see the Noah Movie

I’ll close with this.  Fellow blogger James Nored gives these 5 Reasons Christians Should View the Noah Movie as a Great Opportunity (and are Foolish to Go on the Attack) I would agree with him.

In fact, some reporting from online sources indicates an tremendous surge to bible sites looking at the Noah passage.

It may be helpful to notice the film’s use of  other sacred texts.

But if you know the Bible story, you can talk about the truth of Scripture in your conversations.

What is your reaction to the Noah movie?  Add your comments below.

Related posts:
3 Ways Pastors Can Do Evangelism
The urgency of the gospel in personal evangelism
10 Devotional Questions about Your Evangelism
7 Secrets of Effective Evangelism Training
Why can some people share their faith so well?
Originally Posted: April 19, 2014 Category: Personal EvangelismTag: evangelism conversation, movie, Noah
Previous Post:

A short film clip for an Easter Conversation about faith
Next Post:Overcome Your Evangelism Fears: “I don’t know what to say”